This is the sixth in a series of blog posts on global pandemics written by the staff of Duke Libraries’ International and Area Studies Department. This post is written by Heidi Madden, Ph.D. , Librarian for Western European and Medieval and Renaissance Studies. 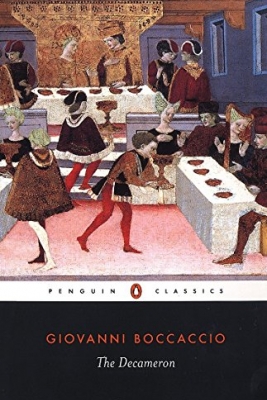 You have all probably seen them: online reading lists created expressly for the bored souls forced to stay indoors because of the restrictions on movement imposed in response to the COVID-19 pandemic.  (If not, check out the “Meta-List of the Books You Should Read in Coronavirus Quarantine,” created by the writers at Open Culture).  Some booklist-makers promise to provide prospective readers with cathartic relief from coronavirus fears through curative stories. Others focus on escapist fantasies that keep you sitting on the edge of your seat (Literary Hub Round).  Still others recommend plague novels that let us walk with our fears in virtual communities and to experience our common humanity through empathy. But no matter where you find them or who writes them, most online reading lists created during the COVID-19 pandemic—such as this piece in Vogue magazine, significantly entitled “Six Centuries later, The Decameron is Suddenly the Book of the Moment”—reach back to the Italian Renaissance and, more specifically, to Giovanni Boccaccio (1313–1375) and his Decameron (multiple copies of which are available in English translation, in both print and electronicformat at Duke University Libraries).  In this blog post, I will try to provide some context for understanding this seemingly irresistible attraction to what more radical literary critics would dismiss as a canonic work of yet another dead, white, Western male.

First, let’s begin with some historical and biographical context.  In 1347, when the bubonic plague—or what Joris Roosen and Monica H. Green’s 2020 bibliography on the state of Black Death research in the era of COVID-19 called The Mother of All Pandemics—arrived in the port of Messina, Sicily, and quickly began to spread across the Italian peninsula, Boccaccio was a 34-year-old struggling writer living at home with his parents.  The illegitimate son of a prominent and prosperous citizen of the city of Florence, Boccaccio aspired to follow in the footsteps of his older and more famous contemporary, the great Italian poet Petrarch (Francesco Petrarca, 1304-1374), and their even greater role model, Dante Aligheri (d. 1321), the author of the Divine Comedy.  That is, Boccaccio wanted to become a “humanist,” i.e. a scholar-writer who used the classics of Greek and Roman literature to create a rich and vibrant, vernacular Italian language, in place of what he and his allies dismissed as the stilted, officious Latin tongue, the language of both Church and State.  In effect, to transform the irredeemably corrupt world that they had inherited from previous generations and to lay the groundwork for a metaphorical rebirth (It. rinascimento, Fr. renaissance) of the beauty and splendor that the humanists associated with the lost world of classical antiquity.

When the plague reached the city of Florence, in 1348, tens of thousands of people died of the deadly infectious disease, at least three times the number of those that had died of the same disease during an earlier outbreak back in 1340.  This time, Boccaccio’s father and stepmother were among the victims of the deadly infectious disease—a personal loss that also left the writer in possession of the family fortune.  Now that Boccaccio had the financial means to pursue an independent literary career, he embarked upon an ambitious, multi-year, book project, one that would eventually come to be known as his literary masterpiece.  The setting for this work, which was written between 1348 and 1353, was inspired, at least in part, by the author’s personal experience as an eyewitness and survivor of an outbreak of the plague.

However, the Black Death was more than just the immediate stimulus to Boccaccio’s most famous literary work.  It also served as the literary framing device for the 100 novellas contained in the anthology to which he gave an Italian name that he had coined, as one would expect of a Renaissance humanist, from ancient Greek (< δέκᾰ, “ten” and ἡμέρᾱ, “day”).  This was a reference to the number of days that the book’s main characters—consisting of a company of 10 young Florentines (seven women and three men, representing various vices and virtues)—spent in bucolic self-isolation, regaling each other with stories, while the pandemic raged outside the walls of their villa and all around them.

The description of the plague with which Boccaccio’s begins his book was not just an eyewitness account of the outbreak in Florence in 1348.  It was a mini-literary work in itself, inspired by the classic description of the plague of Athens in the History of the Peloponnesian War, written by the ancient Greek historian Thucydides (460 BC to 400 BC).  Like Thucydides, Boccaccio’s description of the plague in the introduction to the Decameron offered a realistic account of the outbreak of the disease, its symptoms, and its impact on society; and like Thucydides, he focused on earthly matters rather than on supernatural powers.  In this, as in many other instances—for example, in many of the plots and themes of the novellas in the Decameron—Boccaccio reveals the humanist project of translating classical stories, motifs, and images into the literary language of the contemporary author and his era. In effect, Boccaccio can be seen as a node in a network of literary texts and their authors—both those that preceded him and those that followed him—and thus as part of a much more complex web of cultural linkages than is usually depicted in the old syllabi of Western Civ courses.

A striking visualization of the connections between Boccaccio and literature before and after the publication of the Decameron was created in 2016 by Kristján Hannesson, a graduate student in the UNC Department of English and Comparative Literature (you can download the full chart from Scribd).  Kristján was one of the grad students who took a course on Boccaccio taught by Duke Professor Martin Eisner, a renowned expert on the Italian Renaissance and an authority on Boccaccio.  Professor Eisner helped Kristján and the other students in the course to organize and curate an exhibit on Boccaccio and the Genealogy of Stories, which was held on July 20, 2016 – October 16, 2016 in The Jerry and Bruce Chappell Family Gallery at Duke University Libraries.  As the title suggested, the exhibit sought to show the genealogy of all of Boccaccio’s stories: where they came from and whom they influenced.

Each circle in the genealogy of stories corresponded to an exhibit case in the Chappell Family Gallery that allowed for the exploration of the texts found in beautiful rare editions held at Duke University’s David M. Rubenstein Rare Book & Manuscript Library.

The exhibit cases teamed with beautiful Boccaccio related editions from the Rubenstein Library.  One case, for example, displayed a painting and an actual potted plant next to a book showing the opening lines of John Keats’ Isabella, or the Pot of Basil (1818), a narrative poem in which the English Romantic adapted the story of Lisabetta (Fourth Day – Novel 5): Her lover has been murdered and appears to her in her dreams; she goes to dig up the lover’s body and plants the head in a pot of basil that she tends to day and night.  Isn’t that romantic?

Another exhibit case included a depiction of a (literally) heart-wrenching scene from the Decameron (Fourth Day, Novel 1): juxtaposing a painting (c. 1650) by Bernardino Mei (1612 – 1676) of Ghismonda, cherishing the heart of her murdered lover, Guiscardo, with a miniature on the same theme from one of the illustrated editions of the Decameron, held by the Rubenstein Library.

As these two examples suggest, and as the prominence of female characters in the Decamerondemonstrates, in Boccaccio’s case, the “human” in humanist explicitly included women.  As the compiler of an encyclopedia on the lives of famous women (De Mulieribus Claris, available in English translation)–the first in what became a literary genre that stretches from the 14th-century to the present–the Florentine author was acutely aware of the important role that women play in society, not just in traditional familial roles, but as free agents and independent thinkers.  Boccaccio’s recognition of the role of women in society and the importance of hearing their stories is undoubtedly one of the reasons why the Decameron appears so modern.

But perhaps the best explanation for the appeal of Boccaccio’s work is also the simplest.  The Decameron is an anthology of love stories, which are by definition based on perennial themes (jealousy, anger, fate, desire, hatred, lust, virtue) that change much more slowly than the societies around them.  Pandemics may come and go, but a good love story will always stick with you.