Pope Joan and the Top Girls: An interview with Gaby McDonald (Trinity College, class of 2021) 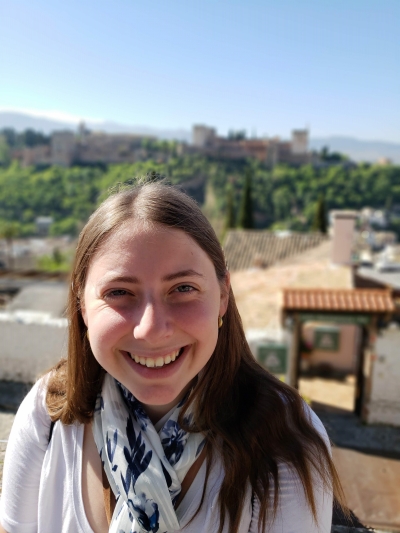 Gaby McDonald, a graduating senior, double majored in Biology and Medieval and Renaissance Studies. She opted to graduate with distinction in her Medieval and Renaissance Studies major by completing an honors thesis titled “The Dangerous Popess: Pope Joan, the Exclusion Crisis, and Restoration Theater.” This thesis, which was awarded Highest Distinction, explores the political and gender implications of the myth of Pope Joan in Restoration drama. In fall 2021, Gaby will begin medical school with plans to become a doctor.

How did the legend of Pope Joan become an interest for you? What was compelling about studying this legend?

I came across Pope Joan completely by happenstance. In one of my classes while I was studying abroad in Madrid, we saw a production of Caryl Churchill’s 1982 play Top Girls. It’s an amazing play. In the first act, five famous women from history and one modern successful woman discuss their lives. One of these five women is Pope Joan. I found her story in the first act so emotionally resonant that I immediately started Googling her during the intermission. After the play, she remained in the back of my mind until I took Professor Thomas Robisheaux’s graduate-level “Microhistory” course and ended up doing my final term paper on Pope Joan. In my work on this paper, I became really fascinated by Elkanah Settle’s play The Female Prelate. The question I had when I found this play was “Why is Pope Joan being put on in a play in 1680s London?” That was really my starting question for my thesis.

How did beginning the thesis in this way, discovering something in a modern work and then moving backward to the seventeenth century, change how you thought about the relations between premodern culture and our own modern historical imagination?

What I found really interesting is the status of Pope Joan’s story as myth throughout history. By the time that Settle was using Pope Joan’s story in the 1680s, it was fairly established that her story was a myth. Looking at this myth across a wide range of time, I found that it was deployed in strikingly similar ways. So, I think that tells us a lot about how we have imagined medieval history and particularly medieval women’s history.

At the beginning of your thesis, you express gratitude for having learned “the joy of primary sources.” What is this joy about?

As a freshman, I was in the Duke Medieval and Renaissance Studies Focus Program. I was in two classes, one of which was taught by Professor Robisheaux and which was held in the Rubenstein library. In this class, we worked with primary sources almost every day. Being able to interact with these texts’ words directly was something that I found really cool. The amount of information you could get out of being able to physically look at a source was astounding to me. Experiencing this drew me toward the Duke Medieval and Renaissance Studies program and eventually toward my research project on Pope Joan.

What did you learn by doing this thesis that you would never have found out?

It is very hard to conceptualize how much work goes into a major research project. I did not believe that I was going to finish the thesis until it was sitting in front of me completed. Discovering that this is something I could do has been and will continue to be really valuable for me. Also, writing and then revising multiple times 27,000 of my own words—that taught me a lot about how I write.

Has your thinking about writing changed as a result of your thesis experience?

Definitely. One of the big learning curves for this project was finding out what it meant to revise my own writing. Up to my thesis, I would proofread my writing but not really revise it. With a thesis, you cannot do that; you have to revise. I also found that the work of writing is very much the work of analysis and thought. In order to solidify my thoughts about a particular text, I had to write about it. The writing is actually an analytical process, and that’s something that I found very enjoyable.

How did you find working with a thesis committee?

I found super helpful the act of explaining my project to someone who was not deeply embroiled in the same materials as I was. It helped me see whether I was on the right track with my ideas. Beyond this, I think it is very difficult to see your own writing idiosyncrasies unless you have someone reading and giving you feedback on your writing. The whole process just made me grateful for my professors [Tom Robisheaux, Sarah Beckwith, and Katie Dubois]. I could not have done this without them.

You majored in Biology and are going on to medical school with plans to become a doctor. Why did you decide to write an honor’s thesis for your second major in Medieval and Renaissance Studies instead of for Biology?

I knew that I wanted to do some sort of thesis project. But basic science research did not really click for me. What I realized, in my junior year, is that I had taken five or six courses in the Medieval and Renaissance Studies major, and in all of them I had really enjoyed writing my term papers. My advice to other Duke undergraduates considering an honor’s thesis is to choose something you’re really interested in and excited to spend a lot of time on.

Do you recommend that students planning to have careers in the STEM field get a second major in the humanities as a complement? What do you see as the value in doing so?

I think if that is something they are interested in doing, they should absolutely go for it. Having a humanities major, I think, helps you better understand people, and that is a benefit in all fields, medicine in particular. I fully believe that if you are at Duke, you should take full advantage of the fantastic opportunities there, and one of the opportunities for me was working with the fantastic professors in the Duke Medieval and Renaissance Studies program. I would recommend the humanities to everyone because it’s really fun having small classes and getting to know your professors.